Energetics of the Baroclinic Tide from the HRET Model

The kinetic and potential energies, and the energy flux, associated with the low mode baroclinic tides have been diagnosed from the altimeter-derived HRET8.1 model. In order to diagnose these quantities from the model, it is necessary to decompose the solution into separate internal modes for each tidal frequency (M2, S2, K1, and O1 are considered), and this provides an opportunity to compare the phase speed of the modes as inferred from altimetry with the phase speed predicted by the theory of inertia-gravity waves. For the mode-1 M2 waves which are determined most accurately, it is found that the theoretical phase speed exceeds the observed phase speed by 1 to 2%, with the bias increasing towards the west within the major basins. It is not yet clear if this difference is related to bias in the altimeter-derived values or if it is related to a limitation of the wave theory or the data on which it is based. The integrated energy in the mode-1 M2 tide is found to be 43 PJ, and the directional distribution of the associated energy flux is nearly isotropic. When compared with independent estimates of the barotropic-to-baroclinic-mode-1 generation rate, the residence time for M2 energy is found to be 2.5 days, which agrees well with previous independent estimates. The average energy flux divergence of the mode-1 M2 waves is in excellent agreement with previous independent estimates of 200 GW. Similar comparisons for the mode-1 K1 tide are also in agreement with independent estimates. Energy diagnostics for the mode-1 S2 tide suggest that the HRET model only captures about 1/3 to 1/2 of the energy in this wave; and, likewise, diagnostics for the mode-2 waves suggest that the M2 wave is captured by HRET, but the model is likely missing about 1/2 the energy. These latter results are consistent with expectations about the utility of altimetry for identifying these waves. 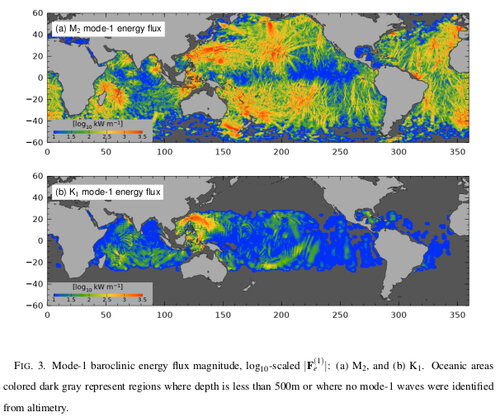