Basal melting of floating ice shelves and iceberg calving constitute the two almost equal paths of freshwater flux (FWF) between the Antarctic ice cap and the Southern Ocean. For the Greenland ice cap the figures are quite similar although surface melting also plays a significant role. Basal and surface melt-waters are distributed over the upper few hundred meters of the coastal water column while icebergs drift and melt farther away from land. While the northern hemisphere icebergs are, except for rare exceptions, small (<10km2), in the southern ocean large icebergs (>100km2) act as a reservoir to transport ice far away from the Antarctic coast into the ocean interior, whilst fragmentation acts as a diffusive process. It generates plumes of small icebergs that melt far more efficiently than the larger ones.
Ocean General Circulation Models that include interactive icebergs show that basal ice-shelf and iceberg melting have different effects on the ocean circulation and that icebergs induce significant changes in the modeled ocean circulation and sea-ice conditions around Antarctica or in the northern Atlantic. The transport of ice away from the coast by icebergs and the associated FWF cause these changes. These results highlight the important role that icebergs and their associated FWF play in the climate system. However, there is actually no reliable direct estimates of the iceberg FWF to either validate or constrain the models.
Since 2008 the ALTIBERG project maintains a small iceberg (less than 10km2) database (North and South) using a detection method based on the analysis of satellite altimeter waveforms. The archive of positions, areas, dates of icebergs as well as the monthly mean volume of ice icebergs now covers thirty years (1992-2021).
Using classical iceberg's motion and thermodynamics equations constrained by AVISO currents, ODYSSEA SST's and Wave Watch 3 wave heights, the trajectories and melting of all detected ALTIBERG icebergs have been computed for both hemispheres. The resulting trajectories (several hundred thousands) are then used to compute on a regular grid the daily FWF using a calibration method to compensate for the numbers of available atlimeters during the 30 years.
The volume of ice, the probability of presence of icebergs as well as the FWF's temporal and spatial distribution for the 30 years are presented for both hemisphere showing the strong increase of the volume of ice and FWF around Greenland and the complex time and space variability in the southern ocean.
Figure legend: mean daily FWF, mean daily volume of ice , mean icebergs surface and thickness : 1992-2021 period, 50x50km grid. 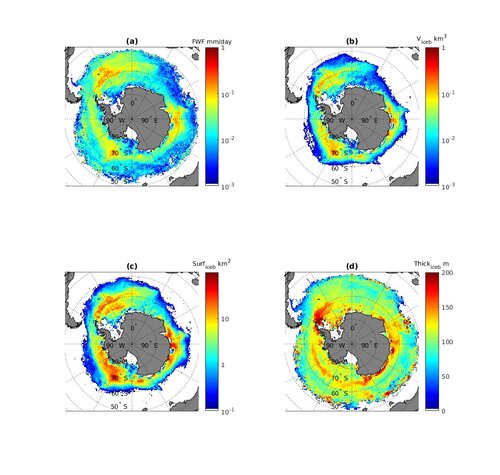