The Patagonian slope is a very complex region, where subantartic waters and bathymetry give raise to a unique area of ecological processes and one of the greatest fisheries in the world. We show here that the combination of the arrival of a colder and saltier water mass and the decrease in surface chlorophyll-a concentration are the dominant key factors that controlled the foraging and diving behavior of one southern elephant seal (Mirounga Leonina) in austral late spring 2018. Satellite altimetry and color data, Mercator system outputs and almost 5,000 profiles of temperature, conductivity, pressure, light and prey encounters were used to investigate the ocean dynamics and seal diving and foraging behavior. Profiles were collected within 59.5-61 °W and 46-47.5 °S and between 300 and 700 m depth in the Patagonian slope during November and December 2018 by one elephant seal. Measurements obtained by the seal show a decrease in temperature (0.2°C) and a salinity increase (0.04 psu) below the mixed layer during December. We first used the satellite altimetry data to validate the Mercator system outputs. Then, with the help of a 3D particle tracking model, we found that the cold water mass that arrived in December came from the eastern passage of the Burdwood Bank (BB), while in November most of the water arrived from the western passage of the BB. Light data revealed a significant increase of luminosity in December (almost reaching the ocean bottom) associated with a decrease of chlorophyll-a in the upper levels. The elephant seal showed a distinct behavior during this two-months trip, doubling the prey capture attempts in December with respect to November. 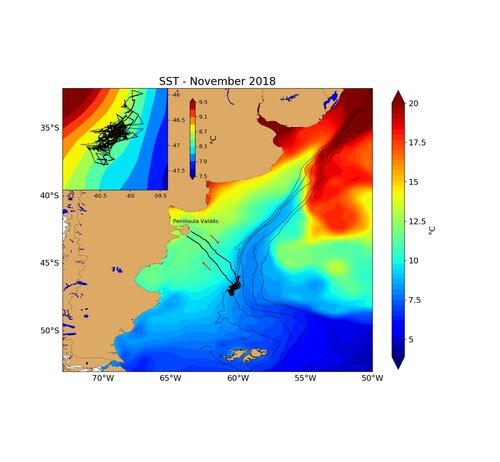