Satellite altimetry is a unique system that provides repeated observations of significant wave height (SWH) globally, but its measurements could be contaminated by lands, slicks or calm water with smooth surface. In this study, capability of subwaveform retrackers against 20 Hz Jason-2 measurements is examined in the calm Celebes Sea. Distances between contamination sources and Jason-2 observation points can be determined using sequentially assembled adjacent waveforms (radargram). When no contamination sources are present within a Jason-2 footprint, subwaveform retrackers are in excellent agreement with SGDR MLE4 retracker that uses full-length waveforms, except that ALES retracker has a positive bias in a calm sea state (SWH < 1m), which is not unusual in the Celebes Sea. Meanwhile, when contamination sources exist within 4.5 km from Jason-2 observation points, SGDR occasionally estimates unrealistically large SWH values, although they could be partly eliminated by sigma0 filters. These datasets are then compared with WAVEWATCH III model, resulting in good agreement. The agreement becomes worse if swells from the Pacific is excluded in the model, suggesting constant presence of swells despite the semi-enclosed nature. In addition, outliers are found related with locally-confined SWH events, which could be inadequately represented in the model. 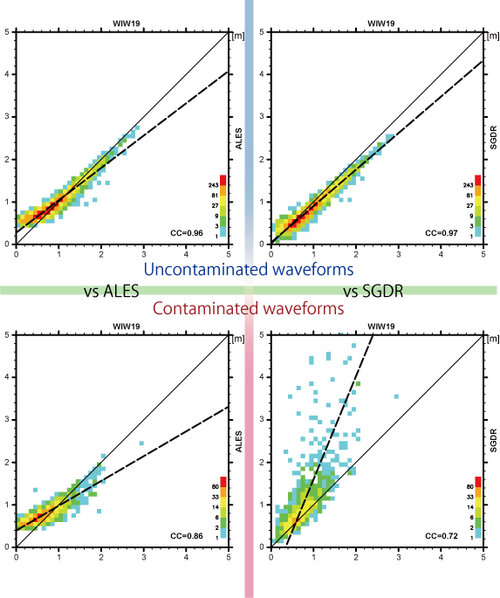