The studied region is the continental shelf bordered by the poleward Brazil Current to the east. The transport across the shelf break is perceptible from maps of satellite temperature, salinity, chlorophyll concentration, and from altimetry-derived geostrophic currents. Here we present the result of a high-resolution ocean model experiment which aims to describe the 3D structure of the shelf/open-ocean exchanges. The use of passive tracers and the release of floats allow quantifying the onshelf and offshelf transports. Of particular interests are (i) the transport across the shelf break in the subsurface layer found to be as important as the transport within the surface layer and (ii) the contribution to the advection of nutrient-rich shelf waters to the open-ocean by small-scale eddies generated where the shelfbreak changes orientation. The variability of the cross-shelf transport is also assessed here. 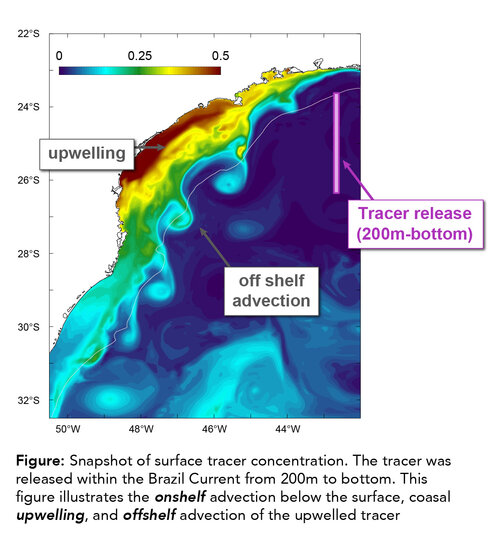