Session: Science I: Climate data records for understanding the causes of global and regional sea level variability and change

The South Indian Ocean (SIO) is one of the major heat accumulators among the oceanic basins. During the 2014-2016 El Nino, its heat content south of 10ºS dramatically decreased. This led to the associated drop in the mean sea level by 6 cm, which constitutes about 50% of the regional mean sea level rise in 1993-2018. The variability of heat content and sea level in the SIO is strongly influenced by processes in the equatorial Western Pacific. During La Nina/El Nino conditions, the stronger/weaker than average trade winds lead to the accumulation/reduction of heat and sea level rise/fall in the Western Pacific. The anomalies of heat content and sea level rapidly propagate into the SIO via the Indonesian Throughflow and coastally trapped waves, and extend along the West Australia coast. Subsequently, Rossby waves generated at the eastern boundary propagate these anomalies into the interior of the SIO. Besides this mechanism, local processes linked to both the El Nino Southern Oscillation (ENSO) and Indian Ocean Dipole also affect the variability of heat content and sea level in the SIO. Using observations (satellite altimetry and Argo profiles of temperature and salinity) and an ocean state estimate from Estimating the Circulation and Climate of the Ocean, we investigate the relative contribution of remote (originated in the Pacific) and local processes in the variability of heat content and sea level in the SIO. We find that remote processes are more effective at decadal time scales, and they were responsible for heat accumulation during the La Nina conditions in 2005-2012. On interannual time scales, while both remote and local processes are equally important in the southeastern part of the Indian Ocean, the contribution of local processes increases westward. The negative anomalies of heat content and sea level at eastern boundary induced by the 2014-2016 El Nino did not reach the interior of the SIO. Instead, the concurrent negative anomalies in the ocean interior were generated by local wind forcing correlated with ENSO. Furthermore, while negative anomalies were still present in the eastern SIO in 2016-2017, positive anomalies emerged west of 95ºE. These latter anomalies were generated by the concurrent intensification of southeasterly trade winds. Furthermore, they were responsible for the partial recovery of the SIO heat content and sea level after the dramatic drop during the 2014-2016 El Nino. 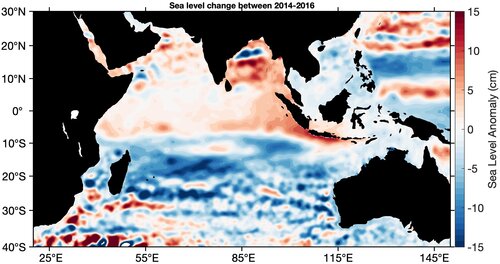