Growing awareness of plastic pollution in the ocean results in increasing numbers of projects and ideas of the open ocean cleanup. The efficiency of such operations is severely limited by the absence of an observing system capable of detecting individual items of their dense groups.

To help coordinate the search of debris, we simulate patterns of old, low-windage debris. In these numerical experiments, model tracer is advected by the SCUD (Surface CUrrents from Diagnostic) model, derived from a synthesis of drifter and satellite data. A standard drifter is drogued at 15 meters depth that corresponds well to the vertical extent of such debris as derelict fishing nets or depth of mixing of microplastics. The model starts from 1993 (when satellite altimetry became available) and is run under continuous uniform source from all shorelines. Calculations are looped until the solution reaches saturation. This way we eliminate sensitivity to (usually unknown) distribution of debris sources and focus on the tracer patterns that are determined by the ocean dynamics. Panel A exemplifies the model tracer pattern that was tested and approved in several collaborative debris search operations.

One lesson from that experience was that wind plays a critical role in the success of the operation: wind ways block the view and mix debris down, removing it from the surface and making observations difficult. Even if debris is detected, it’s retrieval in the rough sea may be also difficult. To account for the effect of the wind we use 10-day NOAA WFS output (B) and introduce functions (C), describing wind effects on visibility and operations. These functions are then used to mask tracer simulations (A). The final product, presented on panel D, visualizes a compromise between areas of high debris concentration and regions of acceptable forecasted sea state.

The North Pacific product is public and is currently being tested in operations.

Figure Caption. Real-time model tracer concentration (A), 10-day mean speed from the NOAA WFS (B), function describing effects of the wind on visibility of debris and feasibility of operations (C), and combined product quantifying success of the search & retrieval operation (D). Units are m/s in B and conventional elsewhere. 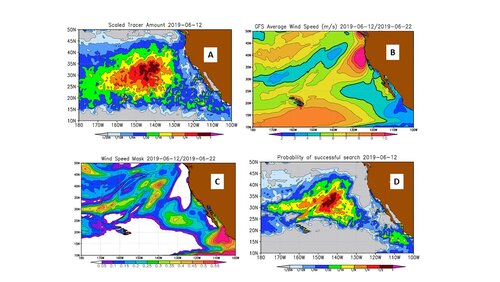