Converging surface currents create in subtropical oceans areas of high-concentration of floating artificial debris (“garbage patches”). This debris can carry marine biota over long distances and provides a substrate for a new type of pelagic ecosystem, in which coastal species can survive and establish. To study the oceanic processes, responsible for the formation of such marine debris accumulation areas, the multi-institutional team of the interdisciplinary project FloatEco deployed in 2018 a set of Lagrangian tools, including nine drifting buoys with drogues attached between 2 and 20 meters and trackers attached to real debris objects. Preliminary analysis of the trajectories showed that after deployment drifters spread consistently with the vertical shear of Ekman currents, sampled by different drifters at different depths. However, after the initial dispersion, drifters remain in a relatively small area, filled with mesoscale and submesoscale eddies, and their highly fractal trajectories (see Figure) reflect strong horizontal eddy mixing without any significant difference between the drifters of different geometry.

Two pairs of drifters were trapped for several weeks in cyclonic submesoscale eddies and converged to a distance of only 100 meters. Characteristics of the drifters suggest that the vertical scale of the submesoscale circulations was comparable to the mixed layer depth. High vertical coherence of such eddies may be homogenizing the ocean momentum, stratified by the wind stress.

Remarkably, real debris tagged with satellite trackers demonstrated a similar behavior and was wandering in the same area as drifters. Type and size of debris object as well as change with time of the debris geometry, derived from their observed responses to the local wind and from interruptions in satellite transmissions, did not have strong effect on debris residence in the garbage patch.

Preliminary results of FloatEco suggest that mesoscale and submesoscale turbulence reduces effects of the wind-induced vertical shear on the horizontal mixing. Physical mechanisms of this reduction is under investigation.

Figure Caption. Trajectories of 9 drifters with varying drogue depths, deployed in the eastern North Pacific November 2, 2018. Streamlines in the background are real time currents diagnosed with the SCUD model. Units are cm/s. 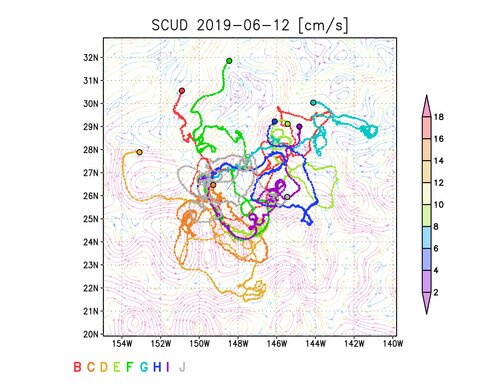