While the global mean sea level is rising, ocean and atmosphere dynamics make sea level change spatially and temporally nonuniform. On interannual and longer time scales, the ocean exhibits certain patterns of sea level change with alternating signs over different time periods. These patterns are relatively small amplitude, however, they can extend to coastal regions and provide background conditions favorable for the occurrence of extreme sea levels that represent a threat for coastal communities, especially in low-lying and flood-vulnerable regions. In this study, we show that the gyre-scale circulation in the North Atlantic, associated with the Atlantic Meridional Overturning Circulation (AMOC) and meridional redistribution of heat, is related to a tripole mode of sea surface height (SSH) variability, with the subtropical band varying out-of-phase with the tropical and subpolar bands (see figure enclosed). Observations of the AMOC at 26.5N are representative for heat exchange between the tropical and subtropical bands of the tripole. We demonstrate that a reduction/strengthening of the AMOC transport at this latitude leads to heat divergence/convergence in the subtropical/tropical band. On one hand, the associated anomalies in the thermosteric sea level in the tropical band extend along the northwest coast of Africa towards the Strait of Gibraltar and, thus, can impact sea level in the Mediterranean. On the other hand, the thermosteric sea level anomalies in the subtropical band of the tripole are largely responsible for interannual to decadal changes of coastal sea level south of Cape Hatteras and in the Gulf of Mexico. The SSH tripole appears to explain 60-80% of the coastal sea level variance in these regions. Using an ocean data synthesis product, we further demonstrate that the temporal evolution of the SSH tripole mode in 1993-2018 is largely driven by the large-scale heat divergence related to the AMOC and linked to the low-frequency North Atlantic Oscillation. 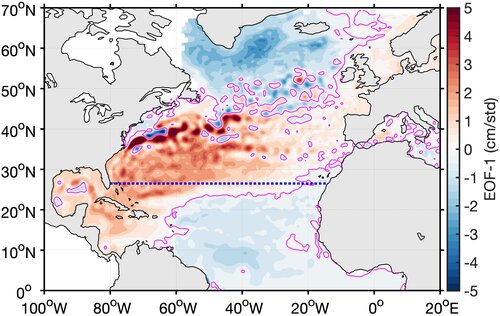