Conventional pulse limited (LRM) altimetry is a powerful tool to detect and characterize small (<10km²) icebergs and to measure the profile of large ones (>16km in length). The Cryosat-2 SIRAL is the first altimeter that can operate in two new modes over the ocean besides the classical LRM: the Delay Doppler or SAR and the SAR Interferometric (SARin) modes. Over most of the sea-ice free ocean, SIRAL operates in LRM mode and the classical iceberg detection algorithm, based on the detection of parabolas in the waveform space, can be applied without modification. It can also be applied to the Reduced SAR or pseudo-LRM data computed from SAR and SARin data. In SAR mode, iceberg signatures are bright spots in the thermal noise part of the waveform. They can be easily detected using classical image processing tools.
The SIRAL SARin mode is the most advanced mode, primary used around the ice sheet margins. SIRAL performs synthetic aperture processing and uses a second antenna as an interferometer to determine the across–track angle to the earliest radar returns. The SARin mode provides thus the exact surface location being measured. In SARin mode, the coherence between the two antennas signals can be used to insure the presence of scatterers above the sea surface and to improve the SAR waveform detection algorithm by reducing the probability of false alarm. It also allows to better delineate the icebergs within the waveform. Furthermore, in SARin mode the range analysis window (240m) is four times larger than that in LRM and SAR mode, which double the altimeter's detection swath. However, the main interest of SARin mode is the possibility, for the first time for a satellite sensor, to precisely locate the surface scatterer and to allow the estimation of the iceberg free-board from the phase difference. The high across-track accuracy also allows to map the iceberg topography at an unprecedented resolution. It is thus possible to compute the iceberg volume.
The whole archive of SARin data has been processed to produce a database of small icebergs characteristics, location (lat,lon), time, area, free-board, backscatter around Greenland and Antarctica. The figure which presents the area and freeboard of the icebergs detected near Antarctica from 2010 to 2016 clearly shows the regional variations of the freeboard and area that could reflect the thickness of the ice sheet from which the icebergs calved . The distribution free-board has been regionally analyzed and compared to sea ice thickness data from the BEDMAP2 and NASA Operation IceBridge (OIB) datasets to better understand the origin of the small icebergs. The size distribution has also been regionally computed and analyzed. The distributions follows quite well power law with -1.5 slope. This kind of distribution was already found for the LRM detected icebergs and from visible images analysis and is characteristic of fragile fragmentation.
Figure caption: Freeboard (left) and area (right) of the SARin detected icebergsfor the 2010-2016 period. 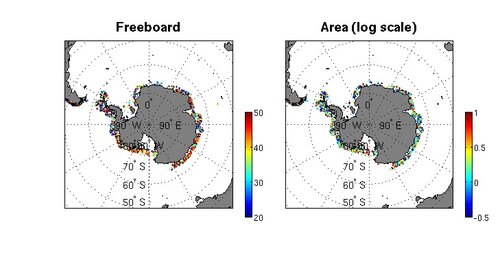