On 6 December 2013, Cyclone Xaver pounded the coasts and the North Sea. All along the Wadden Sea, the barrier islands along the north of the Netherlands and the northwest of Germany experienced record storm surges.

We show a comparison of the storm surge measured by the radar altimeter AltiKa on-board the SARAL satellite and various types of in-situ data and models.
Two tide gauges along the German North Sea coast confirmed that the storm drove sea level to about three meters above the normal tide level. The altimeter in the mean time shows that the storm surge was noticeable as far as 400 km from the coast.

Furthermore we compare the altimeter-derived and in-situ sea level, wave height and wind speed products with outputs from the Operation Circulation and Forecast model of the Bundesamt für Seeschifffahrt und Hydrographie (BSH) and with a global storm surge forecast and inundation model of the Joint Research Centre (JRC) of the European Commission.

Departure between model and altimeter-derived values, in particularly wind, are investigated and discussed. The qualitative agreement is satisfactory; the maximum storm surge peak is correctly estimated by BSH but underestimated by JRC due to insufficient wind forcing.

The authors acknowledge the kind support from the BSH, the Bundesumweltministerium (BMU), Projectträger Jülich (PTJ), and the Wasser- und Schifffahrtsverwaltung des Bundes (WSV). 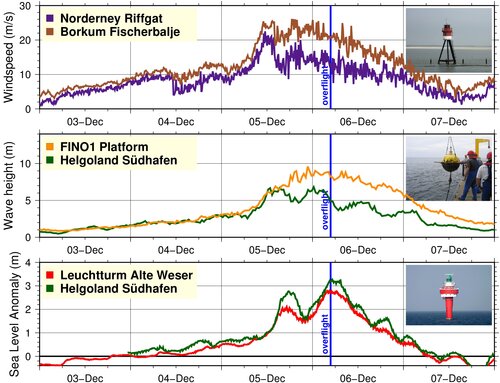