The Wet Tropospheric Correction (WTC) retrieval algorithm developed since years in collaboration between IPSL and CLS is based on a semi-empirical approach that proved to estimate a WTC with an optimal performance with respect to the quality of the altimetry system.

The retrieval greatly benefits from the physic contained on one hand in ECMWF representativeness of atmospheric and surface phenomenon and on the other hand on radiative transfer model and surface roughness computation.

In the lack of a low frequency channel (18.7 GHz), the WTC estimation algorithm for bi-frequency radiometers (Sentinel-3, AltiKa) uses the altimeter backscattering coefficient (sigma0) and the sea surface temperature (SST) as sources of information on the surface emissivity contribution to the top of the atmosphere signal (Obligis 2009).

A neural network is trained on a database built with the WTC computed from ECMWF atmospheric profiles as the target, the inputs being and the temperature profile lapse rate (Gamma), the SST, the simulated brightness temperatures (TB) and the simulated sigma0.

Then, the optimal performance of the neural network is insured by both the consistency between ECMWF WTC and the simulations during the learning step and by a linear adjustment of the instrumental inputs (TB and sigma0) onto the simulations as a preliminary step of the retrieval.

This approach is applied with success on ERS-2, Envisat and Sentinel-3 at Ku-band but the performances were not as expected on AltiKa at Ka-band. Previous work (Picard 2015) concluded first that the simulated sigma0 was too different from the measurements, probably due to the larger sensitivity to the surface at a shorter wavelength, and secondly that the WTC retrieved from a neural network learned on measurements almost reaches the expected performances.

The simulation of the altimeter sigma0 at nadir is largely based on the works of T. Elfouhaily on a Unified Directional Spectrum for long and short waves (1997) and Lemaire (1998). The simulated sigma0 is proportional to the product of the effective Fresnel coefficient and the probability density function (PDF) of large wave slopes, both terms being computed from the integral of the Elhouhaily spectrum.

The following terms of the spectrum computation are reviewed and/or updated (equation numbers refer to in Elfouhaily 1997). The impact of each of these terms on the dependency of the simulated sigma0 to wind speed is analyzed and compare to the measured sigma0.

- the generalized Philipps-Kitaigorodskii equilibrium range parameter in the short-wave curvature spectrum (eq. 40) was used in its linear form (eq 43). It works well for large wind speeds (larger than 6 m/s) but it fails to represent the large sigma0 values at small wind speeds. This as a limited impact on Ku band but seems critical at Ka band. The two-regime logarithmic law (eq. 44) gives better results when compared to measurements both at Ku and Ka bands.

- the limit between these two domains corresponds to “the transition from aerodynamically smooth to rough flow with onset of increased small-scale wave breaking events” and occurs at ustar ~ cm (~ 6.8 m/s) according to (Banner & Melville 1976). This leads to a bump on the dependency of the simulated sigma0 with wind speed that is not visible on measurements. Based on a pure empirical approach (physical explanations are still to be analyzed), we propose a new limit of ustar ~ 0.6 x cm (~ 4.1 m/s) which reduces the bump.

- finally, a Gaussian shaped spectrum is introduced at small wave numbers to account for the swell that have a strong signature on measurements at Ka-band.

After a discussion on the comparison between simulated and measured sigma0 at both Ku and Ka band, the impact on the WTC retrieval and on the quality of the altimetry system is presented for Sentinel-3 and AltiKa. 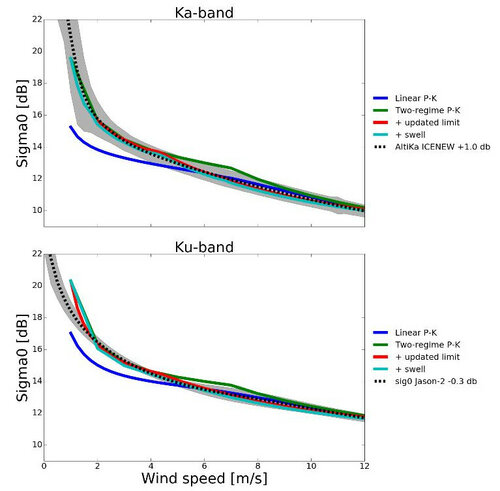