Wave height variations at scales under 100 km: a dominant effect of currents?

Tidal currents and large oceanic currents, such as the Agulhas, Gulf Stream and Kuroshio, are known to modify
ocean wave properties, causing extreme sea states that are a hazard to navigation. Recent advances in the understanding and modeling capability of ocean currents at submesoscales have revealed the ubiquitous presence of fronts and filaments. Based on realistic numerical models, we show that these structures should be the main source of variability in significant wave heights at scales less than 200 km, with importantvariations down to 10 km. The modeled spectra of SWH in the Gulf Stream and Drake Passage regions have shallow -1 to -2 slopes for wavelength larger than 100 km, and a clear transition to a -3 slope for shorter wavelength (10 to 100 km). This spectral shape is generally supported by the analysis of AltiKa SWH values for wavelengths greater than 70 km. Around wavelengths of 10 km, the spectrum of significant wave heights is found to be roughly proportional to
<SWH>^2/(g^2<Te>^2) times the current spectrum, where <SWH> is the spatially-averaged significant wave height,
<Te> is the average energy period, and g is the gravity acceleration.

This current-induced variability creates gradients in wave properties that were previously overlooked and are relevant for extreme wave heights, remote sensing, and nearshore dynamics. In particular the wave climate along the U.S. east coast exhibits +/- 10% variations that are caused by currents at scales 10 km and shorter.

Figure caption: Impact of current on swells across the Gulf Stream on September 18, 2014, 6:00 UTC. Maps of (a) wave height, (b) high resolution current from ROMS (d) same current field smoothed. (c,e)
wave height difference for cases with high resolution or smoothed currents. The dashed box is the region used for the spectral analysis shown in bottom left panel. 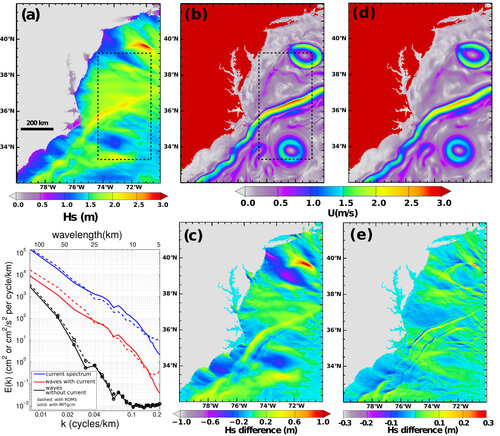