Integrated monitoring of the rivers-estuaries-ocean continuum combining satellite altimetry and hydrodynamical modeling: a case study for the Bengal delta

The Bengal delta connects the largest river system of South Asia, the Ganges-Brahmaputra-Meghna (GBM), with the northern Bay of Bengal. It is home to marked variability of the water cycle, over a broad range of timescales, from a few hours (tides, cyclonic surges, flash floods) to a few weeks or months (monsoonal floods in the rivers, mesoscale turbulence in the near-shore ocean). Despite profound implications of the water level variability on the society and economy of the 150 M people populating the delta, its dynamics is poorly observed and understood. This stems from the lack of consistent, continuous, synoptic data records of the following key-parameters: river stages and discharges, coastal and estuarine water levels, near-shore sea surface height and currents.
This poster presents an attempt to curb this lack of knowledge, by making extensive and synergistic use of space borne altimetry and numerical hydrodynamical modeling. We conduct our investigations across the whole continuum, from the upstream part of the rivers, through the estuaries and down to the coastal ocean.
We first present a novel tidal model of the area, covering the whole northern Bay of Bengal and extending up to the upstream limit of the tidal part of the rivers. This tidal atlas is based on a specific high-resolution bathymetric dataset we assembled, yielding a tidal solution of unprecedented quality over the area.
We then focus on the estimation of river discharge, based on the classical stage-discharge relationship, using satellite altimetry. This is challenging as this is done over the downstream part of the GBM delta, where the tidal noise of the stage captured by altimetry can not be neglected.
We then present an initiative to derive the dominant tidal constituents in the near-shore ocean, where the signal-to-noise ratio of nadir altimetry is far less favourable than in the open-ocean. Our approach consists of applying a specific processing algorithm of altimetric ranges, inherited from continental altimetry.
Finally we present preliminary results of a pilot in-situ experiment conducted in the ocean shelf region, based on an original ship-borne GPS device : the towed geodetic blanket (CalNaGeo developed by DT-INSU in the frame of the TOSCA project FOAM). This device is shown to capture the multi-scale variability of sea surface height, at horizontal scales ranging from a few dozens meters to several dozens kilometers. In particular this device is shown to sample adequately the signature of meso and sub-mesoscale turbulence of the coastal circulation.
As such, our study opens up bright prospects for both thematic and cal/val activities of the future high-resolution nadir and swath altimetric missions (Sentinel-3 and SWOT), in a key-region of the tropical freshwater cycle. 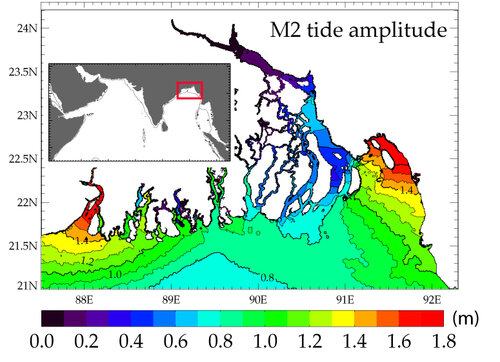