One of the main benefits of the along track processing in SAR altimetry is the speckle reduction that is achieved by multilooking all the single look waveform that are gathered for a given position on the Earth surface. This abstract is aimed at presenting the further speckle reduction that can be achieved on sea waveform by compensating the along track antenna pattern on the stacks of single look echoes before multilooking.
It is worth recalling here the processing chain for a SAR altimeter: firstly an approximately equally spaced set of ground locations on the Earth surface, i.e. surface sample, is identified, then each burst of received echoes undergoes azimuth processing, through beam sharpening exploiting the phase coherence of the pulses. This way, a surface sample gathers a stack of single look echoes coming from the processed bursts during the time of visibility. The multilooked waveforms are obtained by averaging the single look echoes for each surface sample, so that, exploiting the statistical independence of the looks, the effects of speckle and thermal noise are reduced.
However, in a surface sample stack, each single look echo has been acquired from a different position of the instrument along the orbit and as a consequence it results to be scaled in power by the antenna pattern as function of the look angle. But being the speckle a multiplicative noise, also the speckle noise power will be shaped by the antenna pattern so that the speckle has not the same power on all the single look echoes. Thus, by simply averaging the single look echoes, the speckle is not expected to be reduced as much as possible.
An increased speckle reduction can be obtained by compensating the power shaping due to the along-track antenna pattern on the stack before averaging. This way the power from the off-nadir beams is increased so that the speckle contribution from those waveforms is raised to the same level of the speckle in the central beams. In other words, the along track antenna pattern compensation results in a speckle noise equalization across the stack before the multilooking operation.
Experiments have been conducted on CryoSat acquisitions over open ocean and by compensation of the along-track antenna pattern it has been measured an increase of the Equivalent Number of Looks (ENL) of about 25% in correspondence of the leading edge, as it shown in the attached figure. This ENL increase is expected to lead to a decrease of the range noise, being it inversely proportional to the square root of the number of independent measurements that are averaged. 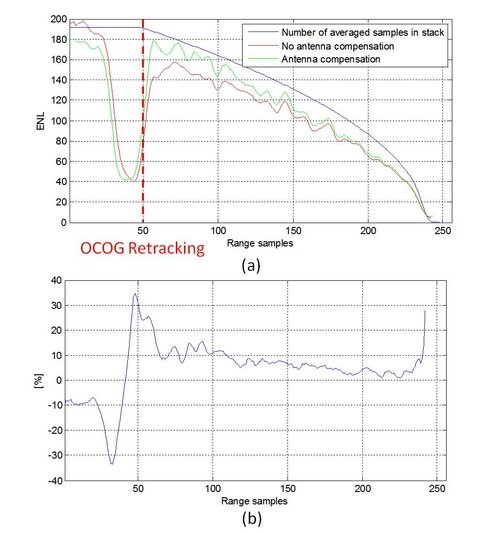