Satellite observations can help in the retrieval of constituents in shallow waters. Noise contamination, however, makes smaller constituents irretrievable and large sources of error. Throughout shallow areas, the constituent’s relevancy changes. For example, near an amphidromic point where M2 relevance drops, so does the potential of satellite contribution for improving its accuracy. Moreover, shallow waters are generally influenced by many constituents (>100). Accurately retrieving all these constituents with satellite radar altimeter data alone is not possible. Series length requirements imposed by the Rayleigh criteria to separate constituents are still unavailable.
Removing unwanted signals from satellite observations improves least-squares-based harmonic estimates, given an inversion matrix with the same condition number. This variance reduction is the core of the remove compute restore approach commonly used. First, residual harmonic sets are computed with the difference between observations and model background estimates through conventional or weighted least-squares. Then, the residual harmonics are added to the background model estimates.
Here we implemented a method that extends the typical approach by including model background estimate and error covariance in the least-squares step. This inclusion helps to weigh between constituents well represented in the model and those that must be updated.
To test the method, we designed a semi-synthetic experiment. First, we used tide gauge data to generate a satellite equivalent dataset and compared estimations between the two methods listed above and the model estimate. Next, we applied the method to compute tidal estimates along satellite radar altimeter tracks (T/P Jason) in the 2D Dutch Coastal Shelf Model (DCSMv6) domain.
Results from the synthetic experiment show that the second method produces consistently better estimates reducing RSS consistently through temporal cross-validation. In addition, it provides an effective way of keeping as many constituents estimates as the model series can resolve, adding the benefits of satellite observations. Finally, results from the North Sea implementation show the new estimates increase the variance reduction of satellite residuals across the whole domain relative to background tidal estimates. The range of improvements varies between 0 and 3cm, which is significant given already very accurate model background estimates. The benefited areas include the English Channel, the Irish Sea, the English North-Sea Coast, the Bay of Biscay, the German Bight, and the North Atlantic region close to the upper boundary of the model domain. 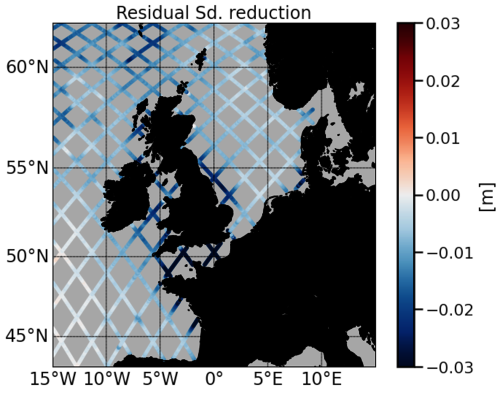