The South American continental slope hosts a variety of topographic waves. We use a 27 year-long global ocean reanalysis (1/12° spatial resolution) to examine trapped waves around South America at periods ranging from 40 to 130 days. The waves propagate from the Equatorial Pacific to the Tropical Atlantic (22°S) with phase velocities between 1.8 m/s and 7 m/s according to the local background characteristics, such as stratification, slope steepness, latitude, mean flow and shelf width. The Madden-Julian Oscillation (MJO) plays a key role in forcing the trapped waves in two ways i) through an oceanic connection implying equatorial Kelvin waves reaching the western American Coast and ii) through an atmospheric teleconnection enhancing southerly winds in the south-east Pacific. Furthermore, local winds, not necessarily linked with the MJO, modulate and trigger waves in specific locations, such as the Brazil-Malvinas Confluence. Trapped waves impact the along-shore currents: during the positive phase of the waves the near-surface flow is enhanced by about 0.1 m/s. 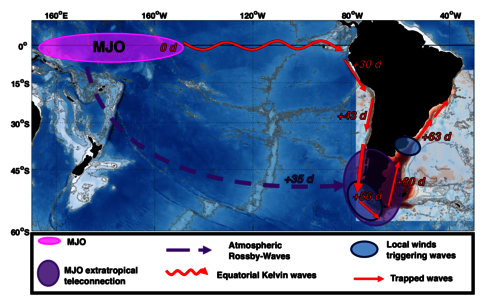