We present a novel application of satellite altimetry to monitor ocean temperatures on the continental shelf around the Greenland Ice Sheet with the goal of better understanding past and better predicting future sea-level rise. Mass loss from the Greenland Ice Sheet is now responsible for about 20% of the total annual increase in global mean sea-level, a dramatic increase from the 1970’s, 80’s and 90’s when the mass balance of the ice sheet was in a state of near equilibrium. About half of present-day ice sheet mass loss is due to enhanced surface runoff while the other half is due to glacier dynamics, mainly enhanced ice discharge by Greenland’s more than 200 marine-terminating glaciers. Recent work has linked the interannual variability of Greenland’s marine terminating glaciers to subsurface ocean temperature variability, specifically the temperatures of the relatively dense, warm and salty waters of subtropical origin (Atlantic Water) that control the intensity of submarine melt occurring along the ocean/glacier interface. Our preliminary analysis of satellite altimetry data in combination with a multi-year record of in-situ ocean data in the vicinity of Jakobshavn Glacier in Central West Greenland suggests that satellite altimetry data can indeed be used to infer Atlantic Water temperatures on Greenland’s continental shelf. In particular, the thermal expansion set by interannual subsurface temperature variations induce sea-level variations of several centimeters, a signal which can be observed in an adequately-processed near-coastal multi-instrument satellite altimetry dataset. Prospects and requirements for employing satellite altimetry to monitor ocean temperatures in different sectors around Greenland will also be discussed. 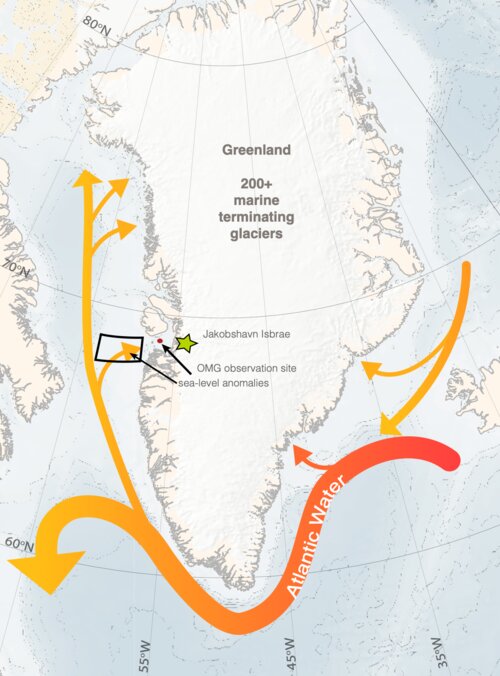