The FloatEco (Floating Ecosystem) experiment studies physical and biological processes controlling the neopelagic ecosystem emerging in the eastern subtropical North Pacific as a result of marine debris accumulation in the so-called “garbage patch” area. Here, we present preliminary results of the study of pathways of debris into, from, and inside the area based on the analysis of trajectories and derived dynamical characteristics of drifters of various geometry as well as real debris items tagged with GPS trackers by the Ocean Voyages Institute and also numerous volunteers and partners.

Response of floating objects to the combined effect of Ekman currents, waves, and direct wind force is summarized and used to improve numerical models. The presence in the central part of the garbage patch of debris with a surprisingly broad range of “windages” is explained by the dominance of unorganized currents and winds, inducing strong horizontal mixing and homogenization. Trapped inside this area, objects with different geometry demonstrate signs of frequent interactions, including direct collisions. Such interactions were confirmed during inspections of the FloatEco instruments and they plays a critical role in propagation of species colonizing debris that, in turn, increases the resilience of the debris-based ecosystem to continuous changes of environmental parameters.

We also discuss the Lagrangian connectivity between the pelagic and coastal ecosystems and identify feasible pathways of coastal species into the garbage patch and potential paths of invasion from the garbage patch into the coastal areas.

The improved numerical models are used to describe seasonal and interannual changes in the garbage patch location, shape, and capacity, estimate the total amount of fishing nets in the North Pacific, and to develop practical applications for optimization of cleanup operations. 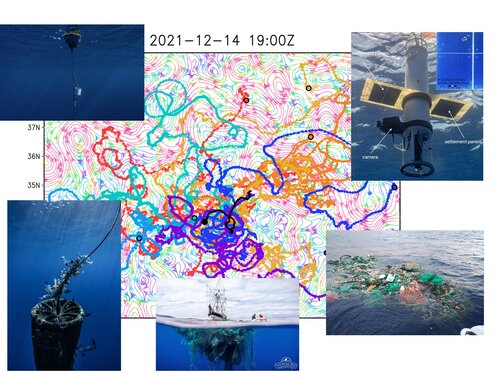