Radar altimeters require periodic external calibration to monitor the instrument drifts that are not covered by the internal calibration paths. These activities are normally performed by acquiring data over active transponders and analysing the performances. European radar altimeters such as CryoSat-2, Sentinel-3 A/B and Sentinel-6A rely on transponders on Svalbard and Crete to monitor their stability, while usage of passive reflectors for radar altimeter calibration has been not feasible as the required size for the corners was to big to achieve acceptable signal-to-clutter ratios (SCR).

Nevertheless, recent developments in radar altimeter SAR-based algorithms allow now to obtain high resolution data in the along-track dimension by recombining all the echoed pulses within the illumination time in a coherent way. These new algorithms, known as Fully-Focussed SAR (FFSAR) algorithms, increase the SCR while drastically reducing the along-track resolution from the current ~300 m obtained with Unfocussed SAR (UFSAR) processing to sub-meter scale.

Being aware that such improvement in resolution represents a new opportunity for passive reflectors, a trihedral corner reflector was designed and installed by isardSAT in one summit of the Montsec ridge in the Pyrenees in April 2021, about four kilometers from cross over between Sentinel-6A and Sentinel-3B. Successful acquisition of the Sentinel 6A have been performed since July 2021. Sentinel-3B is expected to include the corner reflector in the list of calibration targets in the following OLTC update.

We present the Sentinel-6A and Sentinel 3B range, datation and sigma0 results using Corner Reflector. Along-track and across-track resolutions are also computed to monitor the stability of the PTR instrument behaviour. Preliminary Sentinel-6 results have confirmed the corner reflector feasibility as the performances obtained present similar accuracy and precision as the ones from transponders.

Corner reflectors could play a role in future calibration of radar altimeters, especially due to their ease of installation, maintenance and long term stability. 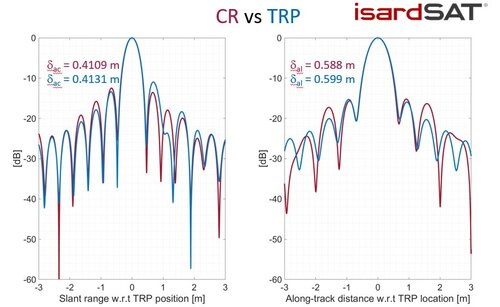