A beta version of a new gridded altimetric dataset, produced using a refined mapping algorithm and with completely open processing, is presented. This dataset, the Open Source Sea Level Atlas (OSSLA), is for convenience momentarily limited to the use of Jason-class altimeters, yet nevertheless compares very favorably with the CMEMS product despite the use of much more data in the latter.

Error-minimizing parameters are found through an observing system simulation experiment. A synthetic Jason alongtrack dataset is formed from interpolation within hourly surface fields from a yearlong simulation of the Generalized Ocean Layered Model (GOLD) at roughly 1/8 degree resolution. The mapping framework is local polynomial fitting, which involves a fit to a low-order polynomial within some radius and weighted by a tapered kernel. A sweep of thousands of different parameter choices identifies the error-minimizing settings at each latitude relative to the full model fields. These optimal choices are then applied to the actual Jason-class altimeter dataset to yield the OSSLA product.

There are several takeaway messages. First, the fits to a first-order and second-order polynomial perform considerably better than the fit to a zeroth-order polynomial, by removing most of the imprint of the track locations. This is thanks to an important theoretical property of linear and higher-order fits known as “design adaptivity.” Second, the optimal parameters deduced here through the minimization of mean-squared error have half-power points varying from about 40 km at high latitudes to about 180 km at the equator, considerably smaller than the scales used in the optimal interpolation of the CMEMS product. Third, the good performance of this product despite being limited only to the Jason class altimeters suggests that substantial improvements may be gained though refining the mapping algorithm. Finally, remaining mapping errors are seen, unsurprisingly, to be correlated with locations where the sea surface curvature is large while at the same time altimeter tracks are absent; this suggests an upper limit to the mapping-based improvements.

A shortcoming of the OSSLA product is the occasional evidence of long-wavelength errors. These could be removed through additional processing using crossover minimization, which has not yet been applied at this proof-of-concept stage. 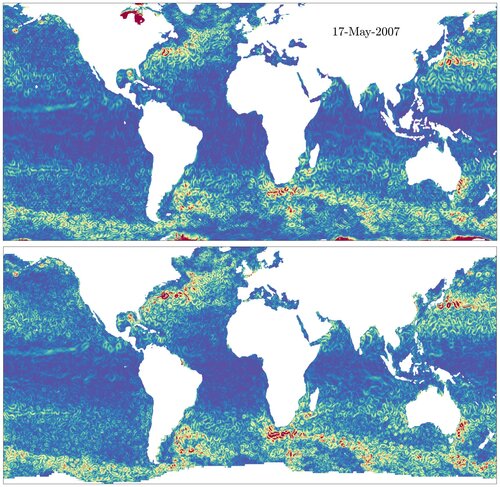