The SARAL/AltiKa mission and its Ka-band nadir altimeter offers a unique opportunity to assess the impact of large atmospheric attenuation onto the radar altimeter. The use of Ka-band for the radar altimeter allows a reduction of the spatial resolution from about 15 km with the historical Ku-band instruments to about 4 km. But it also comes with a larger sensitivity to the atmospheric attenuation, especially under rainy conditions.
As the radiometers on-board altimetry mission have a coarser spatial resolution (12 km for MWR on board SARAL/AltiKa), a new approach is proposed here, based on the 40 Hz sigma naught (one point every 175 m), to characterize the impact of rain cells onto the measurements and anticipate the availability of the observations performed by future two-dimensional swath Ka-band altimeters.
The present study uses for the first time directly the timeseries of the Ka-band altimeter backscattering coefficient when previous studies relied on microwave radiometer (MWR) observations or model analyses with coarser resolutions. The Attenuation CElls Characterization ALgorithm (ACECAL) approach combines low-filtering and non-linear fit to retrieve the amplitude of the atmospheric attenuation at Ka-band, the size and the occurrences of rain cells. It not only provides more representative statistics on rain cells (occurrences, amplitude, size), but also describes the internal structure of the cells.

At global scale and for a nadir instrument, the number of observations strongly impacted by the atmospheric attenuation is limited, with a proportion of observations belonging to rain cells lying between 5% and 10%.
Concerning the atmospheric attenuation within the rain cells, the previous studies relied on radiometer observations or model analyses and thus under-estimated the actual amplitude of the atmospheric attenuation caused by rain by a factor four: the global median attenuation under-rainy situation is about 3.5 dB and 10% of the attenuations are larger than 13 dB.
One originality of the method presented here is also to provide robust statistics on the rain cells diameter, their occurrences and geographical distribution. The median is 15 km, 10% of the rain cells have a size larger than 41 km, and the size are also larger at higher latitudes than over the tropics.
This work also demonstrates the capability of Ka-band radar altimeter to provide observations strongly consistent to the measurements provided by missions dedicated to the precipitations, as the precipitation radar on-board the TRMM mission. The retrieval of rain rate and rain cell size but also the characterization of the internal peaks, if they are distributed as secondary products of altimetry missions would certainly benefit to the community, especially if the approach can be generalized to the future two-dimensional swath altimetry missions. 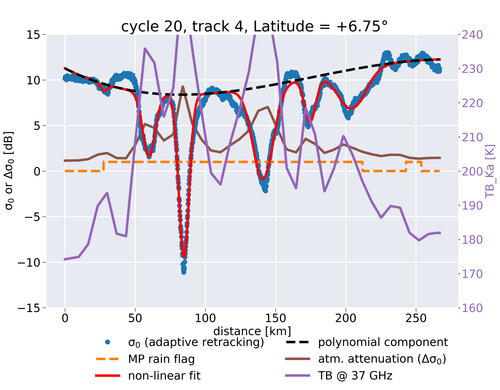