On average, a tropical cyclone (TC) making landfall in the United States causes an estimated $19 billion in damage. The over-ocean intensification of TCs can bring stronger winds and greater rainfall to land areas, making them even more dangerous and costly. This effect was seen in Hurricane Katrina, which went on to cause a record $161 billion in damage. The number of strong - category 4 and 5 - TC landfalls in the US has increased substantially in recent years, with more having occurred in 2017-2021 than in the 54 years preceding that period. One recent example of such a TC is Hurricane Ida, which intensified rapidly from a category 2 to a category 4 storm over the Gulf of Mexico early on 29 August 2021 before arriving on land later the same day. Rapid TC intensification is tied to the heat content of the upper ocean, historically defined as the amount of energy stored in the ocean at sea temperatures of 26°C and above. However, it is clear that additional details of upper ocean stratification are a key factor in the extent to which TCs are able to rapidly intensify.

The NOAA Next Generation Enterprise Ocean Heat Content (NGE OHC), an empirical parameterization, generates depth-resolved ocean profiles to provide daily upper ocean heat content fields and support detailed analysis of the potential for rapid intensification. The method, based on the Geostrophic Empirical Mode, leverages the prevalence and predominance of low mode baroclinic variability in the ocean to directly estimate profiles from altimetry, sea surface temperature, and ancillary parameters. In the North Atlantic, the resultant profiles resolve 94% (92%) of the variance in temperature (salinity) of in situ observations in the upper 1000 dbar. In comparison with the current operational product, the NGE OHC algorithm shows increased accuracy during extreme conditions. In particular, during Hurricane Ida the NGE OHC algorithm decreased the error in estimating the Argo-observed depth of the 26°C isotherm from 31.5 m (legacy product) to 3.25 m. A synopsis of the results from the preliminary product is discussed. 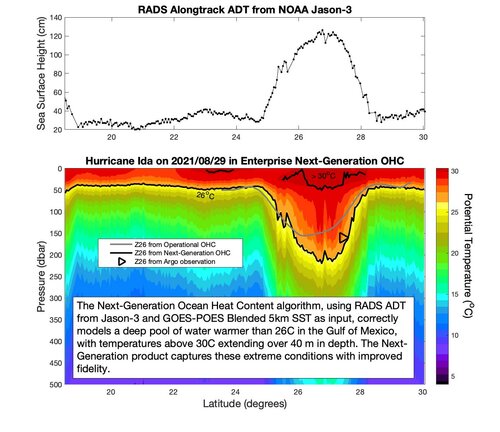