Surface wind is an essential variable for the study of ocean dynamics. It is one of the main agents responsible for driving ocean surface currents since it is directly related to the generation of mechanisms such as Ekman’s currents. The role of the surface winds is especially relevant in complex coastal areas such as the Gulf of Cadiz (southwestern of the Iberian Peninsula), where the wind field is highly variable in the spatio-temporal domain. Therefore, improving weather models to accurately simulate the wind speed in complex areas is needed for the study of both the ocean and the associated climate variability. Unlike in-situ data from weather stations and buoys, which allow the evaluation of the temporal evolution of the model’s simulations, wind speed from satellite altimetry enable the analysis of the spatial variability of the wind speed along the satellite track over the ocean.
This work presents the capabilities of wind speed (WS) retrievals from the altimeters on-board satellites Sentinel-3A/B (S3A/B) for the spatial validation of WS outputs from the Weather Research and Forecasting (WRF) model over the complex coastal area of the Gulf of Cádiz (GoC). In order to assess the applicability of the altimetry data for this purpose, comparisons between three different WS data sources over the GoC area were evaluated: in-situ measurements, S3A/B altimetry data at 20 Hz of posting rate and the WRF model output. Outputs from the WRF model over the area were evaluated with in-situ data, with satisfactory results (WS bias < 0.75 m/s) over the different locations. The spatial variability of the WS derived from the WRF model was compared with the along-track altimetryderived WS. The analysis was carried out under different wind synoptic conditions. Qualitative and quantitative results (average RMSE < 1.0 m/s) proved the agreement between both data sets under low/high wind regimes, proving that the spatial coverage of satellite altimetry enables the spatial validation of high-resolution numerical weather prediction models in water-covered surfaces, including coastal areas.
This work aims to fostering the use of altimetry data for improving the knowledge of the wind speed and sea surface circulation over complex areas where the availability of in-situ measurements is limited or inexistent. We have shown how the spatial coverage of satellite altimetry enables the spatial validation of high-resolution NWP models in any water-covered surface of the world, including coastal areas, a feature that sets altimetry apart from any other data source. 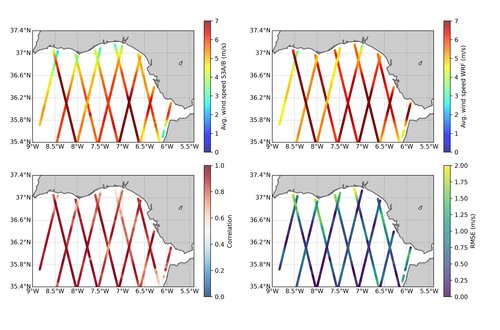